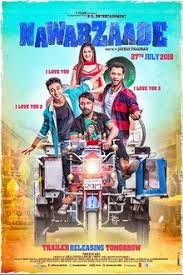 Representing the notes of the song High Rated Gabru, which is sung by Guru Randhawa. The song was used in ‘Nawabzaade’  a romantic movie with a little bit of comedy is it, which was released in 2018. The song gained a lot of popularity and receive a lot of love too. The snow was first released on YouTube and receive millions of views. Guru Randhawa’s High Rated Gabru has over 400 million views on YouTube and for the singer, this is not the first time that his song has been featured in a film.

The song feature Varun Dhawan and Shraddha Kapoor. Varun Dhawan, with his effortless moves, is sure to impress the viewers but it is Shraddha who proves to be a little disappointing this time. The video also features Raghav Juyal, Punit Pathak and Dharmesh Yelande, who are part of the leading cast of Nawabzaade.

The movie nobody is a comedy where Raghav Juyal Punit Pathak and Dharmesh fell in love with the same girl.  They all the same girl and free accept all of them. In the song, The only part Vallavan have in the movie is the day that he did on the song High Rated Gabru. All the three dancers play a role of a comedian which is liked by the fan. The song got a lot of love on social media and on YouTube as well.

Check out the piano notes here :