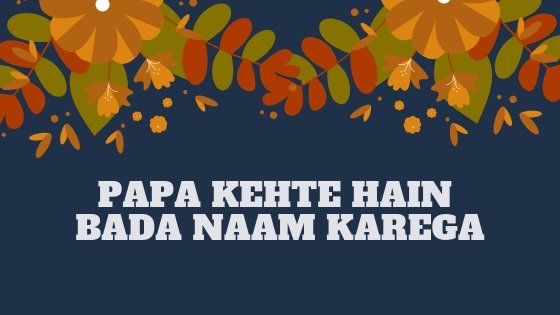 The song Papa kehte Hain bada Naam Karega is from the 1988 Indian Hindi-language musical romance film, Qayamat se Qayamat Tak. The movie stars Aamir Khan and Juhi Chawla in the main roles. The complete soundtrack of this movie became a super hit of its time and was received very well by the audience. In fact it was one of the best selling soundtracks of the 1980’s. The most popular and hit song from the movie was Papa kehte Hain which was picturised on Aamir Khan and was sung by Udit Narayan. Anand-Milind who were the composers of this song received great appreciation for this masterpiece. The song was written by Majrooh Sultanpuri. Majrooh Sultanpuri was 70 years old when he wrote this song. The length of the song is 5 minutes 55 seconds.

At the 34th Filmfare Awards, Anand-Milind won the Best Music Director Award, Majrooh Sultanpuri was nominated for Best Lyricist, and Udit Narayan won Best Male Playback Singer for “Papa Kehte Hain”. This song is like an introductory song for Aamir Khan’s character in the movie and has a very fun filled vibe. The song talks about how a son is worried about the expectations that his father has from him but even he is unaware of their destiny is bound to take him. Even Amir Khan received great reception from the audience as well as from the critics for his energetic performance in this song.

The song was and still is one of the most popular songs of the industry. It was part of the movie Qayamat Se Qayamat Tak which was released in 1988. It was a love story that showed how two love birds decided to take matters into their own hands when the people in their lives started interfering in their love story. The movie stars Amir Khan and Juhi Chawla and it was the former’s debut in Bollywood. Amir Khan thoroughly impressed everyone with his performance in the movie and the chemistry between him and Chawla was thoroughly appreciated in the film fraternity. The music video features Amir Khan as a college student who is singing this song in the college freshers, the song is about aspirations and dreams. The song talks about a father’s dream for his son and how every father expects that his son would go on to do great things someday. However, the song also acknowledged the fact that every individual has to make their own way regardless of what expectations his/her shoulders are burdened with. The song is sung by Udit Narayan which further adds to its charm. He is one of the most well-known singers of Bollywood who have lent his voice to some of the biggest stars of the industry.