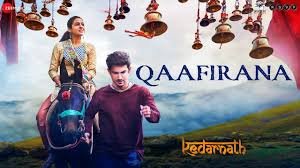 The song Qaafirana is sung by Arijit Singh and Nikhita Gandhi.  The music for the song is given by Amit Trivedi and the lyrics are written by Amitabh Bhattacharya. The song was used in ‘Kedarnath’  a romantic and love movie with a little bit of comedy is it, which was released in 2018. The song gained a lot of popularity and receive a lot of love too. The snow was first released on YouTube and receive millions of views. The song is soothing to the eyes and as well as the ears due to its picturesque location and low notes.

The story is about a Hindu girl Sara father Uttarakhand mountains and Muslim guy (Sushant Singh Rajput) who belongs to a poor family. The song has a beautiful story behind it and can be somebody understands by anyone who watches it. Indore so we can c both of them get closer as the time passes on.  At first, Sushant Singh Rajput seems to have no feelings for Sara, but we can see chemistry building between them. the thing that makes the song so popular the storyline, the feeling of love generating between them and the soft, low pitched track used in the song.