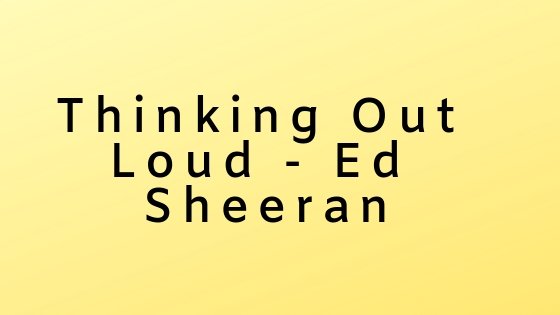 These piano notes are of “Thinking Out Loud” a song by Ed Sheeran an English singer and songwriter, and was recorded by his own studio in 2014. Both song and the sheet music are soft and soothing. It was ranked first in UK top 40 and also in Australia, New Zealand and in Denmark. In Billboard Hot 100 it was ranked number two.

The notes of this song are generally used for dance in proms and weddings because of its soft touch. This Song became the only song to spend a complete year in UK top 40. It was also noted for Grammy awards. These music notes are must try for soft background in events.

According to sheet notes its genre is romantic ballad with little influence in blue-eyed soul. According to Sheeran it’s a song you play while walking the aisle. The song mostly consists of the key D major. Tempo used was 78 beats per minute. Ed Sheeran’s vocals were ranged from A of 2 to B4. With mix voice unusually loud, many of the notes were out of the pitched but fundamentally the Vocals were in the tune. Some noted a similarity in the sheet notes of Let’s Get It on and Thinking out loud. Some says it’s a little upgrade of the classic song of 1973. Nevertheless, the song is a great hit and notes are easy to learn. On 10th of August 2016 it was announced that Ed Sheeran was being sued for plagiarism but later it was found that the claim had no factual grounds to be proved.

On August 2016, it was also announced Sheeran is getting sued by family of Ed Townsend in copyright infringement, who claimed “Thinking Out Loud” plagiarizes element of Marvin Gaye’s “Let’s Get It On”. But claim voluntarily withdrawn, with also the court later saying that there were no grounds or evidence.